A Time to Love and A Time to Heal – Barbara Cameron 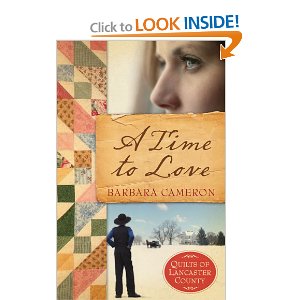 A Time to Love – Barbara Cameron (Quilts of Lancaster County, #1)
Publisher:  Abingdon Press
Pages:  320
Source:  Purchased an ebook
Genre:  Amish Romance
From Amazon:
War correspondent Jennie King thinks she’s just a temporary guest in her grandmother’s Amish community while she recuperates from the devastating injuries sustained in a car bomb attack that changed her world. But when she meets Matthew Bontrager, the man she had a crush on as a teenager, she wonders if God has a new plan for her. Jennie has emotional and physical scars and though she feels she has come home to this man and this place, she’s not sure she can bridge the difference between their worlds.
My Review:
I love Barbara Cameron’s books.  It’s not just a romance story.  There are always elements of mystery included in her  writing. In this story, the first in the Quilts of Lancaster  County,  I found the characters to be very believable and yet leaves you with just enough questions to make people like me want to research more of the Amish lifestyle.  The difference between the two worlds, that of the Englisch and the Amish is well defined yet the author shows us the parallels between the two cultures.  The ending of the book was satisfying yet left you wondering what was going to happen next.  The reader doesn’t have to wonder long because they can find out when they red the second book in the series, “A Time to Heal”. 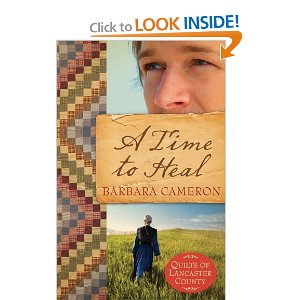 A Time To Heal – Barbara Cameron (Quilts of Lancaster County , #2)
Publisher:  Abingdon Press
Pages:  362
Source:  I received a copy from NetGalley
Gene:  Amish Romance
From Amazon:
Chris Matlock, a wounded and weary ex-soldier, just wants peace in his life, and he believes he’s found it when he visits Matthew and Jenny Bontrager. He envies their happiness and simple life but doesn’t believe that that life is meant for him.
When he meets Matthew’s sister, Hannah, a small spark of hope flares within him. Despite the clash of cultures between the former military man and the pacifist Amish woman, Chris and Hannah fall in love. Chris settles into life in the community, helping Matthew with the farm.
Then the threats begin. At first, Chris plans to leave in order to protect Hannah. Then he discovers who his enemy is and realizes that he must stay and face his adversary, even if it means revealing a secret he hoped would remain buried forever.
My Review:
A Time to Heal is the second book in the  Quilts of Lancaster County series.  We are reacquainted with Jenny, Matthew, Phoebe and Hannah in this book.  This second book once again brings us into the parallelism of the two worlds, the Englisch and the Amish.  Chris Matlock follows Jenny to Lancaster County looking for peace and finds love and trouble.  The turmoil he feels is prevalent throughout the entire story and the reader can’t help but feel sorry for him.  At times though I thought he was so self-absorbed in his own problems that needed to be shaken.  I loved the way it has a happy ending.  What I enjoy most is the theme of forgiveness that runs throughout the book.  One thing I would love to see in the third book is more backstory on Bishop Josiah.  In both books he is seen as a grouch, overly protective bishop.  We get a glimpse at the end of the first book  into his heart and find he does have a soft side.  Then in book two we see the old Josiah back.  I would love to see a book written about him.  His character felt almost like a loose end.  In book two we are also being set up for book three by watching the change in Phoebe.  I look forward to seeing where the third book takes us.  These  whole series is a must read for Amish fans.
This entry was posted in Misc. and tagged Misc.. Bookmark the permalink.